LOCATION OF THE MUSE

She comes and goes? Or he?

Better: They come and go, the Muse.

Some mornings They wakes me

with Their laughter, leads me

down the road singing.

over water. Or in Poland, painting

rainbows around the head

of Their sister and brother. I don’t think

They ever goes to the white house

or congress, though it’s likely

they thrives on the Mall

among the placards and

in the quiet halls of the Museums,

which, after all, is Their houses.

Sing in me, Muse, and through me tell the story

of poets in April, of twists and turns.

Driven to and fro by words and noise,

Many things they saw:  unpeeled oracles,

Thrumming weathers pulsed through their bones.

Even so they saved each other from disaster,

no gods or sirens seduced them.

their own wild recklessness kept them all–

children and fools, they ate the moon,

their muses leapt into their arms

and wept and laughed, and explained their lives.

Enthroned on the peak

the jeering Muse in her Unattainable Princess mode.

She is eating a melon, spitting out the seeds.

Basaltic monolith set down by an alien god

in the middle of the narrow way

between the abyss and the infinite seething swamp

Fierce dark angel with a sword thin as a laser

the strands of the web

synapses in my brain

sinews in my hand

The Muses come in silence.

You must sit still and wait.

For a long time, you must sit.

They come in your grief

when the world is cracking open,

when you wake in the moonlight

and your heart is afraid.

They come in your solitude

when all your doors are closed

and even the cats are asleep.

After a long time they come,

and make music from the tears. 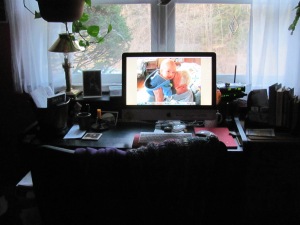 The curtain is open. A small rosy-red room with three walls.

Right wing:  three shelves attached to the upper part of the wall with brackets. On the top shelf, old dolls and stuffed animals:  Raggedy Ann and Andy, a gray satin elephant, a woolen lamb with a pink ribbon around its neck and a worn place on the nose where the straw stuffing is visible, a baby doll in a yellow bunting, several handmade Waldorf dolls. The downstage half of the middle shelf is also filled with dolls: mostly homemade fabric dolls and one old Ginny doll in a red dress, and one Beany Baby airedale sitting next to a Waldorf doll in orange leggings and an apple-print dress. A figurine of a mother holding a baby. On the same shelf, extending upstage, books, held up by a bookend and on the upstage side by a stack of bricks.  Up against the upstage wall, a large fabric doll wearing a rhinestone necklace in her black hair. On the bottom shelf, downstage, more dolls for about a quarter of the space: a German bisque baby, a ballet dancer in a blue felt cape, an old walking doll with tangled yellow hair and a blue dress, a Madame Alexander “Meg” doll in a dress of the same blue, a Russian nesting doll, several Polish dancers. And then books, separated with bookends, an earthenware turtle playing a harp, and a blue bowl fill of stones with a pelican bone on top. In front of the books, a mantle clock and a worn hammer. On the upstage end of the shelf, a tiny doll on a little rocking horse and a basket.  Beneath the shelves, a large dollhouse with a red roof sits on an old black steamer trunk. There is a dulcimer in the corner.

Left wing:  In the middle of the wall, a white bookcase, full of books and notebooks and papers. On the top of the bookcase, a mug full of colored pencils, a basket full of hats and mittens. Above the bookcase, a glass plaque of the Lord’s Prayer in German, held up by a chain. In the upstage corner, a green stool with a black battery charger on it, above it, a print of Utrillo’s “Eglise de Strine” framed in green.

Upstage center:  a double window with filmy curtains on either side, framing a view of bare trees. Centered before the window, a black paymaster’s desk with silver hardwear. In the center of the desk, an old, large desktop computer, a keyboard and a mouse on pads of red closed-cell foam. The screen saver is a photo of a smiling baby grabbing the face of a gray-haired, bearded man. On the back shelf of the desk, left of the computer a brass lamp with a green “Orient Express” label, a black and white photo of a young man in a parka with his hands in his pockets, standing in a forest. An old rolodex.  On the right side of the shelf, a blinking modem.  On the left side of the desk proper, a brass bucket containing a eyeglasses case, a DVD of “Tai Chi for Arthritis,” a list of Polish vocabulary words, and a notebook. Also a chunk of limestone, a Hummel figurine of two children praying under s shrine, a stack of postcards from Mexico and dated 1945, a pottery cup holding eyeglasses, a brass candlestick with a half-burned orange candle, a ceramic coaster featuring Santa Claus knitting a sock.

There is a big black desk chair in front of the desk with a purple shawl draped over the back.

The aging woman enters with a green pottery mug of coffee which she sets down on the coaster. She sits down in the chair.

I must return to the world of words,

where strange syllables sit on bales of straw

It’s nearly always twilight there, or if not,

the sun illumines every edge

or the moon makes magical shadows.

Or it’s raining (especially on the quiet streets).

Everyone I meet has a lesson to teach:

strangers hand me emeralds or bread.

My mother has nothing to say.

I think this was “found” in last  April’s “Prompt” poems–bits and pieces of poems the Spring St. Poets wrote. If it isn’t, I have no idea where it came from, or what it’s about.

Where did I hide when I was ten?
That was the year I stopped feeling solid,
the year I broke things I liked.
I tried to fly away, but could not
with the mass of gravity holding me in.
All that November I sang
like a swamp sparrow.

Must I apologize for my life?
My Ideal Muse expired last year;
my Actual  Muse will never show up.
My favorite sound is the pulse of poets,
though I would not say that in mixed company.
To my favorite god, I offer my favorite globular fruit,
concealed in my favorite hand.

O, favorite hand!
Could you please write this down now, else
the nightmare will continue:  I shall leap around
with the rest of the condemned cattle
until it is finished. The time
will never be more auspicious.

O ye dead poets!  Leave me alone!
I grow old and dare not peel a peach.
Your botched cantatas are stuck in my head forever.
I’d rather sit in my kitchen,
and talk to the microwave.
Damn my grandmother’s premonitions,
her endless Old Sayings!
Damn you all, and your endless noise!

Astonishing, isn’t it?
All this thrumming
has turned my throat to stone.

Mile high glass mountain,
enthroned on the peak
the jeering Muse in her Unattainable Princess mode.
She is eating a melon, spitting out the seeds.

Fierce dark angel with a sword thin as a laser
darting to and fro, to and fro,
severing all connections
the strands of the web
synapses in my brain
sinews in my hand

She can stand still in the middle
of a firefight, leaves unfurling

in her hair, her fingertips
sprouting apple blossoms.

She knows the language
of every beast and bird,

her slow eyes follow the fall
of every drop of rain.

Life is her lover and Death
her favorite brother.

She has never been afraid
of the dark.

She can draw starlight
directly into heart.

APRIL #1:  AN INVOCATION TO MY ACTUAL MUSE

Come visit, me, you.
But just for today, be nice.
Don’t come lugging that bag
of newspaper clippings from high school days,
those letters my mother wrote me when I was in college,
the piles of reminders of the failures
of my unsettled past. Stay out
of my journals and photo albums.
Don’t poke around in my closets or my dreams.
The check book, the credit card slips, the Status Updates–
none of your business.

Don’t slog into my study with that
pinched expression on your face.
Come skipping, for a change.
Don’t fold your hands over your heart
and sigh and blink back the tears.
Snap your fingers, ring some bells.
Don’t you have any clothes that aren’t gray?
I’ve never heard you laugh.
Do you even know how to smile?

Come today with a pot of fresh coffee
and a plate of homemade buttered bread.
Come accompanied by fiddle and flute.
Come with a bouquet of orange tulips.
Come with an empty basket
like the one I carry to the market
to fill with fresh green things.

Glad Errand Poetry Blog by Mary F C Pratt is licensed under a Creative Commons Attribution-ShareAlike 3.0 Unported License.
Permissions beyond the scope of this license may be available at https://gladerrand.wordpress.com/.
%d bloggers like this: